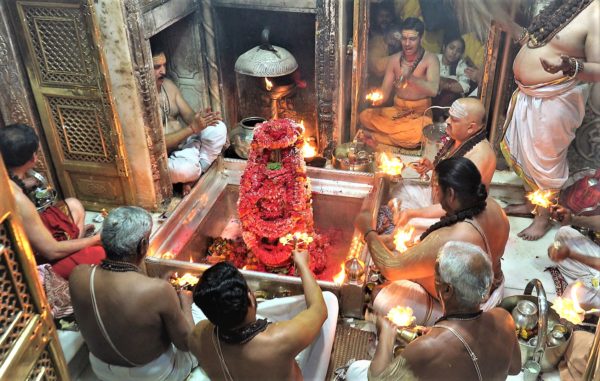 The Saptarishi aarti is said to have been handed down by Lord Shiva himself to the seven sages to enable them to summon his protective powers over this universe. Mentioned as clans in Atharva Veda, these seven rishis or sages were Kratu, Pulaha, Pulastya, Atri, Angiras, Vashishtha and Bhrigu.

The aarti is performed daily at the Kashi Vishwanath Temple from 7 to 8 pm by seven priests belonging to seven different gotras.

The process of the aarti mainly involves a series of chants praising Lord Shiva with the offerings of milk, yoghurt, honey and sacred ash. Then the lingam is decked up with sandalwood paste and flowers.

A silver naga is placed upon the lingam in the final stages of the aarti. The chanting is mostly indecipherable under the pretext that it is an ancient secret. The aarti then builds up into a fast pace and trance-like energy to appease Lord Shiva.

This process has continued in the Kashi Vishwanath temple, Varanasi, since ancient times and has been passed down from generation to generation.